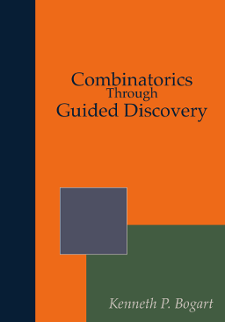 At the time of his death in 2005, Ken Bogart was working on an NSF-supported effort to create a combinatorics textbook that developed the key ideas of undergraduate combinatorics through "guided discovery", or what many today typically call inquiry-based learning. The project was under contract with Springer-Verlag for a commercially-published print edition, but Ken's untimely passing left the project in an unfinished state.

This is a new release of Combinatorics Through Guided Discovery is an attempt to fulfill the Bogart family's wish to see the project grow and reach a complete state. The content is nearly identical to the 2004 release, save for a few typographical corrections. The main addition here is the availability of an interactive web version. There is also a new print edition and pdf version. The conversion from LaTeX to PreTeXt, which included incorporating the online hints and bringing the source code up to date with the most recent PDF available, was completed by in 2017 by Mitchel T. Keller, Oscar Levin, and Kent E. Morrison. The text, along with its PreTeXt source code, are released under the GNU Free Documentation Licence (FDL).

We welcome your feedback on this update. In particular, if you use the book in your class, please let us know so we add your institution to our adoptions list. You can also request the instructor edition if you are teaching out of the book and would like to see solutions to the problems.

This book is an introduction to combinatorial mathematics, also known as combinatorics. The book focuses especially, but not exclusively, on the part of combinatorics that mathematicians refer to as "counting." The book consists almost entirely of problems. Some of the problems are designed to lead you to think about a concept, others are designed to help you figure out a concept and state a theorem about it, while still others ask you to prove the theorem. Other problems give you a chance to use a theorem you have proved. From time to time there is a discussion that pulls together some of the things you have learned or introduces a new idea for you to work with. Many of the problems are designed to build up your intuition for how combinatorial mathematics works. Above all, this book is dedicated to the principle that doing mathematics is fun. As long as you know that some of the problems are going to require more than one attempt before you hit on the main idea, you can relax and enjoy your successes, knowing that as you work more and more problems and share more and more ideas, problems that seemed intractable at first become a source of satisfaction later on.

There are six chapters as well as an appendix with three additional topics:

Many of problems have hints, which can be found in the back of the book (for the pdf and print versions) or linked directly from the problem (in the online version).

Kenneth Paul Bogart was born on October 6, 1943 in Cincinnati, OH. He graduated from Marietta College in Ohio in 1965, and earned his Ph.D. in mathematics from the California Institute of Technology in 1968. He married Ruth Tucker in 1966, and they moved to Hanover in 1968 where Ken was appointed an Assistant Professor of Mathematics. Ken remained in the job that he loved for 37 years being promoted to Associate Professor in 1974, and to Full Professor in 1980. Ken's career was characterized by a love of mathematics and scholarship, and a passion for teaching and mentoring at all levels within the mathematics curriculum. His passion for research is evidenced by over 60 journal articles and nine textbooks in his field of combinatorics. Ken's research covered a wide spectrum of topics within combinatorics.

Ken's mathematical roots were in algebra and lattice theory, and his earliest papers developed structural results for Noether lattices. One of the main topics in his research was partial orders, about which he wrote more than two dozen papers. This line of research started in the early 1970's with contributions to the theory of dimension for partial orders. A number of his papers treated applications of partial orders to the social sciences; for instance, he contributed to social choice theory by examining the optimal way to develop a consensus based on rankings that are partial orders. Interval orders and interval graphs played the most prominent role in Ken's research; his papers in this field span roughly thirty years, starting in the mid 1970's, and about half of his Ph.D. students worked in this area. Among his contributions in this area are the introduction and investigation of new concepts related to interval orders and graphs, the development of new and simpler proofs of key results, and the exploration of a number of structures that are natural variations or interesting special types of interval orders and graphs. Ken also contributed to the theory of error-correcting codes; in particular, he constructed a class of codes from partial orders. He collaborated on several papers in matroid theory, to which he contributed valuable insights from lattice theory and geometry.

Throughout the later part of his career, Ken became increasing interested in how students learn mathematics. His NSF-sponsored project of "guided-discovery" in combinatorics is an element that lives on in the math department. Ken also devoted a great deal of time to helping revise the teaching seminar which is fundamental part of the mathematics graduate program at Dartmouth.

For the past nine years, Ken and Ruth spent winters in Santa Rosa, CA, where they loved to hike and mountain bike.

This biography is excerpted from one written by T. R. Shemanske and posted on the website of the Department of Mathematics of Dartmouth College in April 2005. Shemanske wrote:

I have borrowed freely from a number of published sources (below), and am especially grateful to Professor Joe Bonin for writing about Ken's research, Mary Pavone for her remarks about Ken's involvement with WISP, and for a photo from Ruth Bogart.